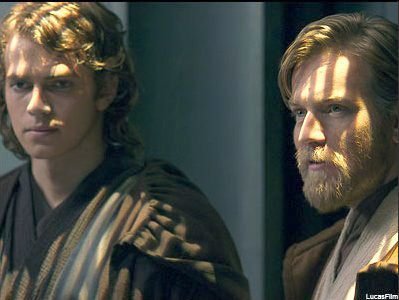 Suddenly there was a noise. Jence reached for his weapons. From above, a monstrous insectoid droid jumped down and began swinging away with its staff. Reveren jumped back and forth, dodging its attacks. In a split second, Jence grabbed his saber, ignited it, and parried the robot’s attack. He blocked, slashed, and kicked it. It fell back and immediately knocked Reveren’s blue saber out of his hands. Reveren sidestepped and fired rapidly at it with his blaster pistol until it blew up. “Mechanical piece of scrap.”

Just then there a bright light shone through the cave. A silhouette appeared; Reveren sensed the dark side. Against the silhouette, a red lightsaber blade extended, pointing at Jence. Reveren drew his saber with the Force and ignited it. “Dooku,” he muttered.

“I was expecting Master Windu or Skywalker. You’re not the usual kind the Council would send,” Dooku replied.

“Well, surprises are my specialty these days,” Jence snapped back.

“No matter. You’ll end up just like my former Master: dead to the wrong cause.” With that, the Count shot a bolt of Force lightning at Jence, throwing him back . Reveren leapt towards Dooku, slashing downward at the Count. Dooku deflected it and withdrew.

“Get back here!” Jence got to his feet, but when he tried to follow Dooku his path was blocked by a large insectoid cyborg in a cloak: General Grievous, holding four lightsabers.

Grievous struck. Reveren blocked, parried, thrusted, side-swiped and cut loose on Grievous, but he was no match. Grievous cut him twice on the shoulders and bloodied up his face with a punch from one of his robotic fists. Reveren fought on, eventually using his blasters as a last resort. But he was out of luck. Suddenly, just when Grievous was moving in to finish Reveren, two blue lightsaber blades intercepted his attack.

Kenobi and Skywalker. They stood on each side of the General.

“Before you pick him off, deal with us first,” Kenobi said.

“You’re not getting away this time, Grievous,” Skywalker threatened.

Suddenly, all four lightsabers were blazing against Anakin and Obi Wan’s weapons. Reveren called up the Ravenstar to target Grievous, but the General was too smart. There was a sudden explosion; Skywalker and Kenobi were thrown back, and then Grievous was gone.

“Sithspit!” Skywalker groaned. He didn’t like losing his target.

Reveren moaned. The two Jedi deactivated their sabers and helped Reveren to his feet.

“Not bad for your first trial,” Obi Wan mentioned.

“I will face him again,” Reveren swore to himself.

“Later… we have evidence that needs to be brought before the Council,” Anakin replied.

All three of them returned to Coruscant.

“The Jedi must not find out about our plan,” Gunray said.

Darth Sidious spoke from a dark corner of the room: “They won’t. Soon our revenge will take place. We have the Jedi right where we want them. Send troops to Kashyyyk immediately. The war is about to turn in our favor.”

The story continues in Episode III…

Pinterest
0
About Professor Jango 388 Articles
Professor Jango is an Administrator on the Port Haven Forums as well as a regular contributor to Port Haven Magazine. In addition to portraying a professor on internet fansites, he is currently pursuing a PhD in Political Science and is an actual professor.