Neverland has come to the Netherlands!

Our Dutch friends get to be the guinea pigs for the Disney+ streaming service and I have never wanted to be a guinea pig more! Alas, I’ll be waiting for the November 12th launch along with the rest of the US and Canada. Double alas for Australia and New Zealand, where consumers must wait until November 19th. And triple alas for anywhere else, where there have not been release dates set at all.

I asked my friend Kelly (found on Twitter as @Kello_Ren) about her new fancy (and free!) trial subscription and here’s some information based on her experience with the site thus far.

For those of you wondering what kind of Star Wars content there is: 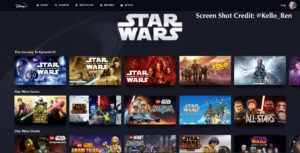 It seems that most of the media on D+ comes in multiple languages. This may change by region to but I’m told that English, Dutch, (Latin American) Spanish, (Canadian) French, German, and Italian audio or captioning can be found in various combos on various titles. This of course may change by region as well, and more languages could be added later.

There are also some behind-the-scenes features found with certain titles. I’m definitely hoping that there will be a good amount of access to making-of like materials, which are usually reserved more for owning the title. 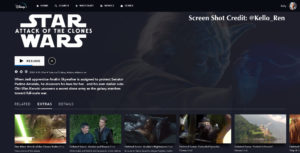 Users are able to set a profile icon much like with Netflix, with options from a wide variety of Disney-owned titles. Including Star Wars and the MCU. A few of the users I’ve seen on Twitter have noted a lack of female choices from among the super-hero/Star Wa 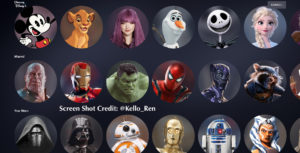 rs character list. Though it should also be noted that there’s an overall lack of characters with Live Action faces. The super-heroes listed all appear in their masks or are their CGI versions. The lack of live-action ladies could be a simple result of licensing, but whether or not it’s intentional it’s left a few of the users thus-far lacking characters like Rey, Leia, Padmé, or even Captain Marvel on the MCU side of things. That said, there’s still plenty of characters to choose from. (I have been informed that Yoda is there!) 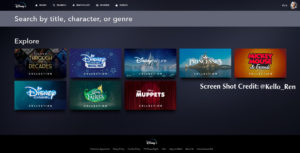 According to Kelly, the site seems easy to use and operate. There’s an intuitive search system as well as “collections” to view. Oddly enough, it seems to look better on Edge (the reincarnation of Internet Explorer) than it does on Chrome. And the PS4 version has a different layout from the computer version. The overall vibe I’ve seen on line has been positive. Or at least the lack of complaints about bugs or technical issues speaks volumes!

I am so excited for Disney+ to launch! The current content alone, all in one place will add some good competition to Netflix and will mark a shift in the streaming landscape as we’ve known it. Then add shows like The Mandalorian, the Cassian and Kenobi series, and The Clone Wars revival… this is truly where the fun begins! While I am sure many of you out there are as excited as I am, please remember than many countries (including our friends in the UK) won’t have the new shows at the same time others do. Be responsible and respectful with spoilers. Muting on Twitter barely helps and no, people should not be expected to stay off of social media, away from their friends, until their country gets Disney+. Or they have the money for that subscription! You, however, always have the option to DM or share in a specific group. And remember, the UK gets The Rise of Skywalker before the US, so watch out for Karma. 😉