Disney has revealed details about Star Wars: Galaxy’s Edge, the new addition coming to their parks next year. Credit to EW for sharing the new information that includes concept art, names of rides, and the park’s new theme composed by John Williams.

Take a look at this great video that features the park’s theme. It’s beautifully composed and a wonderful melody.

The music has little hints of themes from the sequel trilogy. And while much of the park itself is still under construction, certain aspects can be made out and it’s one of the best looks we’ve gotten.

The official names for the two new attractions and a video for each were also released.  The attractions will be called: Millenium Falcon: Smugglers Run and Rise of the Resistance.

Millenium Falcon: Smugglers Run will put guests in the cockpit of the Falcon as they make a daring escape from Batuu. The ride will feature three unique roles for each passenger that are essential for the mission’s success.

Rise of the Resistance will give guests firsthand experience in deep-space dogfights between the First Order and the Resistance. The video was shot inside of the ride, where visitors can also explore a hangar bay and control deck of a First Order Star Destroyer. Guests will also come face-to-face with Kylo Ren at one point in the ride.

Finally, new details on how guests will interact with the hotel at Disney World were also released. Guests will arrive at the hotel and board a shuttle for a simulated ride to their resort located in space.  The hotel itself will be completely immersive with all of the windows displaying starry exteriors. The immersive experience continues with characters and creatures from the Star Wars Universe inhabiting resort.

Below, concept art shows a shuttle transporting guests from Earth to their hotel in space and how the pod will dock onto the larger ship. The concept art of a shuttle’s interior is also shown below. 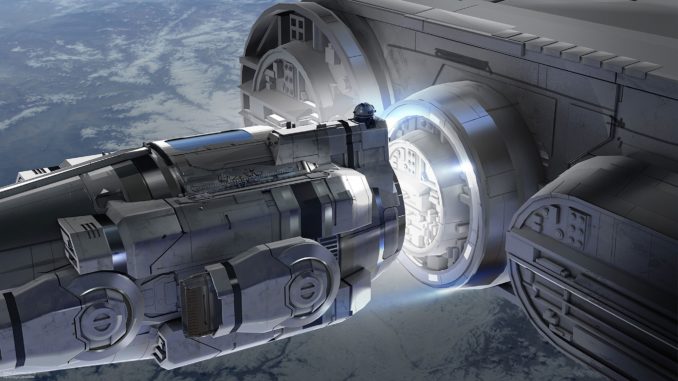 Galaxy’s Edge will open in Anaheim summer of 2019 and in Orlando the following fall.

But what do you guys think? Join the conversation in the comments below and in our forums. Follow us @PortHavenForums on Twitter and visit our YouTube channel HERE.