I had the amazing opportunity to chat with author Beth Revis about writing, fandom, and of course Star Wars. She is the pen behind Rebel Rising, the story of Jyn Erso from the time she teamed up with Saw Gerrara until we meet her imprisoned on the planet Wobani in Rogue One. She also wrote the story Fully Operational in the short story collection From a Certain Point of View, which celebrates the 40th Anniversary of the Star Wars saga.

Besides Star Wars, Revis is an accomplished Young Adult Science Fiction author. Her series Across the Universe is on the New York Times bestselling list and has expanded into multiple novels and short stories. Be sure to check out her website, bethrevis.com, for everything you need to know about her and her work! 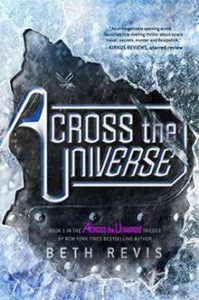 You have several novels under your belt, what sparked your desire to write?

I’ve always wanted to be a writer; there was never a time I can remember where that wasn’t my goal. My mom has a picture of me in first grade with a short story I made based on a coloring sheet; from there it’s history!

From what I’ve seen on your website, it seems that you have a passion for inspiring others to write as well. What is it about writing that you think is so important for the denizens world?

We are a product of the stories we tell. Our culture is based on stories; our fears, our values. And everyone has a story.

It took me a long time to be a published author–ten years, in fact. And I had a lot of help along the way. If I can help someone else, it’s worthwhile.

Fandom seems very important to you. Your site says you’re a Browncoat and Whovian among other fictional loves. What do you think it is about fandom (of any story) that brings people together?

Before getting to write Rebel Rising, would you have called yourself a Star Wars fan? Has your fandom level changed since joining the Galaxy Far, Far Away?

My love for Star Wars started before I have conscious memory of it. I was raised on videotapes of the original trilogy that my parents taped on their VCR from network TV; I still recall some of the commercials that interrupted the scenes. My brother’s name was Luke; I had hair long enough for Leia braids, and we lived in a forest that had pines instead of Ewoks, but we made it work.

Since joining as a writer, I’ve come to love Star Wars even more, because I saw first-hand just how passionate everyone involved is. This is not day-in-day-out work; everyone I met and worked with truly, deeply cares about Star Wars, and that is something very special. 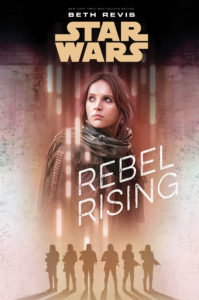 I’m fascinated with how the Story Group works. With Rebel Rising, how did you join the canon fold? Did they come to you with the idea of Rebel Rising specifically? Were you in talks and the pieces just fell into place with this novel? Did you get to name the book?

In all traditional publication, a book is edited. Working with Story Group is honestly like a round of fact-checking edits. They gave me complete autonomy and creative space within the work. The nature of the book meant that I had it fit it into a specific time-frame in the universe, and obviously I was making a Star Wars book that needed to fit in the galaxy, but they didn’t dictate the book and gave me the room I needed to tell my own story.

That said, I’m terrible at titles, and was very grateful for their help with it!

It was absolutely a challenge, but one I really loved. One of my favorite books is A Wrinkle in Time, and there’s a scene where Meg is told about a sonnet–it has a specific framework of lines and rhyme that must be adhered to, but anything can be said within that structure. I felt like Rebel Rising was like that for me. Jyn already had a beginning and an ending within Rogue One, but I got to fill in the stuff that fit between those two points in her life.

In many ways, there was a bit of psychology involved. Jyn has a clear, firm stance on the Rebellion by the time Rogue One kicks off–but I had to determine how she got there. What made her both love and hate Saw? What made her not want to look up at the Empire’s flags, or to try to deny the Rebellion’s cause? It was fascinating working backwards from where she was to think about not just how she got to that point, but why.

Was their a particular storyline or emotional train you were particularly excited to get on the page? A character you had the most fun writing?

I really loved the storyline I wrote on the planet Inusagi. It was a scene I had visually in my head almost from the start, and I’m so glad that I got to explore it. My favorite character to write was Hadder–although I do apologize for his fate. 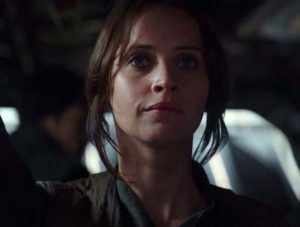 Thematically, Rebel Rising fits so perfectly between Catalyst by James Luceno and Battlefront II: Inferno Squad by Christie Golden. Together they paint a galactic picture on some very major events. Did you have much contact with other authors while writing your own story? How do you think Lucasfilm has managed to build a cohesive expanded universe?

Lucasfilm has built a cohesive expanded universe because they truly love and care about the story and characters. Their passion for Star Wars shines throughout every aspect of the universe.

Writing Rebel Rising was like writing a biography of a historical character. It required research–and Lucasfilm ensured I had all the resources I needed to research properly. I got early copies of books as they came up, and my editor was always available for me to fact-check or compare resources.

Overall, what does the experience for writing a Star Wars novel feel like?

Honestly one of my best writing experiences has been working with Star Wars! They care so much about the creative process and respect stories on such a deep level. Working in that universe was a dream come true, but getting to work with such wonderful people was something I never even dared to dream.

Now for “Fully Operational”, what was the process for getting your character, did you get to pick? Were you given a short list? Did you have toresort to Rock-Paper-Scissors to make sure you got Tagge?

I did get to pick Tagge! I came on a little late to the project, so I obviously couldn’t pick a character someone else had already picked, but that was the only restriction. I was shocked no one had grabbed Tagge yet, so I snatched him up as soon as I could.

I’ve always been interested in Tagge. That scene in the meeting room has always fascinated me. Even before Rogue One, I noticed the empty chair. And Tagge wasn’t exactly a yes-man. He had something simmering under the surface of his character. I am so glad I got to explore it.

As I found out, you intentionally connected this story to the Darth Vader comic line. How did the comics help you shape the character?

They fundamentally shaped his character. Tagge has a distinct personality. We see a brief moment of that in the movie, but the comics fleshed it out. Without the comics, he wouldn’t be who he is. They really delved into how analytical he is, what his processes are. More than talking about what he thought, they showed how he thought, and that was my biggest influence.

If you could write any Star Wars character, current Canon or Legends, who would you most like to write?

I’d love to write Leia. Claudia Gray has done an amazing job with her, and I don’t want to take away from that, but Leia would be a dream to write for me. When I was a little girl, Princess Leia was who I most wanted to be. Now that I’m grown, I want to be General Organa.

Be sure to follow Revis on Twitter and Facebook! And keep it tuned to Port Haven: Your Star Wars Refuge for News and Reviews! A wretched hive of fun and silliny!