Leading up to the release of The Last Jedi, there was a particularly poignant cast photo published. The now-famous photo shows all the major cast members assembled around an intentional gap in their ranks left for Carrie Fisher.

Her public story is so well-known. Daughter of Hollywood legends Debbie Reynolds and Eddie Fisher, indelibly linked with the Star Wars success story (metal bikini and all), and a brutally honest advocate for truth, especially about her own flaws. 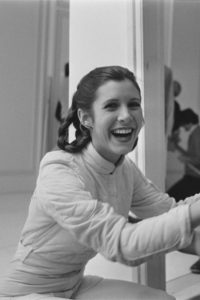 The character she played, Leia, was eerily similar in some ways to Carrie.  She was Hollywood royalty, fierce and courageous but masking an unseen vulnerability often with combat-tested wit and weapons-grade sarcasm.

In some other ways, however, Carrie greatly differed from her character in all the ways that should matter. Carrie Fisher was a real person, which real highs and lows, daunting demons and many loves. The real person was much more complex and fascinating than our dear Leia. And although we know so much about Leia, we’ll probably never know the same amount about Carrie. 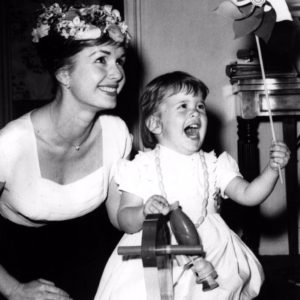 Carrie Fisher’s passing was appropriately tragic for a person who made such a massive indent on our social fabric. I’d even say it was Skywalkerian. The child, taken suddenly from the world would cause her mother to succumb to death of a broken heart. It wasn’t a glamorously heroic way to die (tell me, Fandom, is there such a thing?) but the space she left behind was heroic in proportion.

And The Last Jedi’s portrayal of Leia was oddly prescient in that regard. Her absence causes such a vacuum in leadership that our newly minted hero Poe nearly loses all credibility. And the siblings parting with those words “No one is ever truly gone” had deep meaning. Not just meaning for Han, not just for Luke, and not even just for Leia, but for us in the movie theater. If you’ve ever lost someone close to you, you know this. They’re kept alive in our memories and the lessons they teach us. They exist as mental holograms and emotional avatars in our hearts.

I can’t pretend to know what Carrie Fisher and her character Leia means to all fans or to people in general. For one thing I’m male, so I can’t fully appreciate what she represents to women and girls. But as a fan I can witness it, and let my heart be changed by it. She played one of the first truly popular strong female heroes. When I was 8 years old, I wanted a Leia action figure as much as I wanted Luke’s or Han Solo’s.

And as a father to a daughter, I can appreciate it. To will my daughter to have the strength to fight back against seemingly overwhelming odds and injustices is all I ask. Leia provides an ideal template for that, and Carrie provides the gritty reality behind such struggles. That fusion of grounded understanding with fantastic aspiration is some solid underpinning for a successful and resilient person.

To be fair, Carrie Fisher was ultimately just like all of us – a person locked in the struggle for life until there isn’t one. Some say in the end we all die alone, but I don’t think that’s true, and I don’t believe that was the case at all for her. We were all there with her.

And now, we genuinely respect and regard the space she leaves behind.