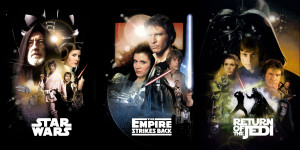 May 25th 1977 and 1983 saw the first and final installments of “The Star Wars Trilogy”. “The” Star Wars Trilogy. And now look at us in 2015; a trilogy, two TV series, smaller spin-off films, comics, games, and novels later. How perfect is it that both trilogies began and ended on the same calendar day? It’s as if even the release dates shout the themes that these films desire to teach us. Sitting down to write about the day Star Wars premiered on this May 25th is a daunting task. At 38 years young, what is left to be said that hasn’t already been said?

That’s an understatement. But today, on the anniversary of A New Hope and Return of the Jedi, we can think about this original trilogy in a new light, not as the final chapter, but as the crucial turning point in a larger story. It is the middle. The second act. And that is something wholly appropriate to the series itself.

Epics, like the Iliad and the Odyssey, (I know, I know, I’m in danger of being pretentious, but trust me) begin in media res. That is Latin (I promise this won’t get pretentious really) for “in the middle of things”. Think back to that first scene of A New Hope and try to imagine it as a first-time viewer. These crazy dudes in space armor charge onto a ship that looks like a fist fighting other dudes with laser guns. WTF? Why does this lady have cinnabun hair? What are these robots? Why isn’t someone kind enough to stop and tell me what’s going on? The best you get is a little scroll, which really isn’t all that helpful. You as a viewer are plopped into the middle of things. Left to your own devices to suss out what’s even going on right now???

It is only after a shoot out that we get any time to comprehend what’s going on. But just as we’ve pretty much determined that the dude in black is probably the bad guy we’re suddenly wondering who these brown-robbed things are and what do they have to do with anything? It’s not until we hear the words, “Help me Obi-Wan Kenobi” that we really get any help at all. This technique of starting in the middle, past all the boring build up, gave Star Wars a very unique energy and sense of wonder. You want to keep watching. You want to learn more.

Star Wars borrows from many of the classic tropes. (If I were pretentious I’d call them “archetypes” but I’m not pretentious now, am I?) Pulling from these classical stories in such a direct way gives Star Wars the weight of history that wasn’t necessarily there. Star Wars, at least the originals, feels old. It feels like a tale of A Long Time Ago. It had the nostalgia of Storytelling itself before any nostalgia could exist for the films themselves. And this feeling magnifies with every passing year.

At first in media res really applied to the beginning of A New Hope. It’s how that film introduced us to the Star Wars Universe. But now with this Sequel Trilogy, it’s a trope that applies to the Original Trilogy as a whole. We were truly brought into the Saga in the middle. (This, of course, assumes they’re going to stop at Episode IX: The Force Goes Back to Sleep.) We saw the turning point before the beginning and then jumped back to the beginning before seeing the final act. As for my own enjoyment, I am so thrilled that a simple concept used to jumpstart what could have been a forgettable flop has now bloomed into unintentional meaning just as that first film blossomed into an unintentional phenomenon.

As for my point about nostalgia, I have a challenge for you. As you remember the times gone by that Star Wars changed your mood, your day, your life, and as those moments make you fear for the times to come with the new films, I challenge you to remember that the Star Wars experience is every bit as important as experiencing the new films in theaters. It’s the fun of teasers and trailers, of rumors and ruminations, of looks and leaks that really makes this a very special time. Enjoy these coming years. We’re blessed and privileged to live in this excitement in a way that future fans will only ever learn about. Be proud of your fandom! Be excited for it to grow! And get ready, because we’re not even at the last act yet! There’s much more in store.

May the Force be with us all.