Hello Port Havenites! I hope you are all recovering well from the end of The Clone Wars! Thanks to the opportunities of a platform like Disney Plus we miraculously have the final season of Star Wars: The Clone Wars and with it new tie-ins to this very exciting era. One of those installments is Star Wars Adventures: Battle Tales! Star Wars Adventures (and its other side-venture Tales from Vader’s Castle) has been an absolutely wonderful series that I can’t recommend enough! While there have been Prequel Trilogy era stories in the series, this will be a focused series of issues all about some of our favorite characters caught u 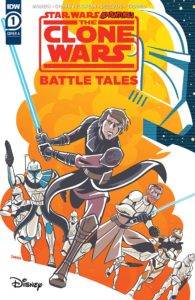 p in some intense action! Starting June 3rd, you can read along.

Michael Moreci is the writer behind Battle Tales. He has written comics for Image Comics, Boom! Inc, and DC, as well as his own novels. He’s written for Star Wars Adventures before as a part of Flight of the Falcon and the comics leading up to The Rise of Skywalker. It will feature art from Derek Charm, Arianna Florean, Megan Levens, Valentina Pinto, Davide Tinto, and Philip Murphy.

We had a chance to ask Michael Moreci some questions, see his answers below!

Do you remember when you became interested in comics?

Honest, they’ve always been part of my life, since as long as I can remember. It’s been books, comics, Star Wars, and horror. And I’ve never looked back!

What is your favorite comic series to read?

Currently I’m loving Money Shot, which I find profound and hilarious. Also Black Stars Above, the latest from AWA, Neon Future, and, of course, all the Star Wars.

I remember watching A New Hope on WGN TV back when I was like three or fours years old. It was on all the time. Crazy thing, though. It must have always hit the mid-way (ish) at my bedtime, because for years, I thought Obi-Wan’s death and everyone escaping the Death Star was the end of the movie! At least that’s where my mom always ended it, haha.

How does writing Star Wars comic vary from writing for other franchises?

Well, nothing is closest to my heart than Star Wars, and I mean that. I have the Rebel tattoo to prove it! But not only that, but to me, Star Wars is the myth of our time, and to contribute to this ongoing story–it’s just magical.

For Flight of the Falcon what was it like working on a series of stories being told in different mediums with different writers?

Weirdly, being honest, none of us really coordinated together. I mean, they’re all great writers and awesome people, but everything funneled through Lucasfilm, so it’s not like we really worked together, per say. I loved–loved–the project, and I’m thrilled to have been part of this cool cross-medium idea, though.

You made a lot of connections to Solo, The Force Awakens, Rebels, and The Clone Wars for Flight of the Falcon. What was your favorite reference you got to include in your story?

Embo, for sure. In all my Star Wars stuff, I’m always trying to incorporate these weird side characters and hidden stuff that’s all in canon. I just love how robust the world is, and I’m always looking for way to tap into the Star Wars tapestry. Plus, Embo is the greatest. Who doesn’t want more of him?

How did it feel to tell official stories for the lead up to The Rise of Skywalker?

It was so crazy, and so amazing. When they asked me to do it, I couldn’t believe it. I mean, look–when The Force Awakens was announced, I said to myself “That’s it, I WILL write Star Wars one of these days.” Two movies later, and I’m part of the narrative. I can’t even believe it.

What were you allowed to know about Episode IX when working on your Adventures Comics?

Who is your favorite character in The Clone Wars? Do you have a favorite story arc from the show?

Easy–Rex. Wellll…it’s a tie. Rex and Ahsoka. Them together–<chef’s kiss>. And my favorite story is the Krell arc. My god. So dark, so intense, so great.

How does working with several artists on one series compare to having a single artist?

It’s a luxury of riches, I tell you. My job at this point–I’m done with the scripts–is to sit back and watch all these incredible, unique artists do their thing. All of them bring such a different voice to Star Wars, yet they’re all perfect for the Star Wars universe. It’s a thrill to see them bring this story to life in their own ways.

I saw on IDW’s site that Battle Tales will have an overall story with characters telling mini-stories of their own, were you able to pick the stories and the storytellers?

Oh yeah. This thing has been my baby since day one, and I’m very, very proud of that. From the concept to the characters we’re using to every single story, it all started with me.

Is there a particular character you’re most excited to include? Was there a character who was the most fun to write?

There might be a new clone in there? Let’s say there is. And if there is, that issue–that story–was my favorite to write. Oh, that and the Obi-Wan/Cody issue. If people can pick up on the easter egg that is that issue, I’ll be very, very happy.

Is there a particular theme or spirit you wanted to invoke in Battle Tales?

My overall goal was to tell a story that thoroughly felt like the animated series. That was first and foremost. The comics needed to capture that spirit. Then, each story had their own point, their own theme that drove the story and revealed something deeper about our favorite clones.

Will we get to see any cool connections to stories outside of The Clone Wars era?

Not really. Because they take place before the Clone Wars movie, we’re kinda limited in scope.

What is one thing you really want fans to know about Battle Tales?

I want fans to know that I love The Clone Wars just as much as they do, and I came to it with the reverence it deserves. If my tenure as a Star Wars writers is remembered for one thing, I hope it’s that I got it right–the feel, the essence, than indescribable thing that we all love so much.

Name one Star Wars character you have not gotten the chance to write but would love the opportunity to do so!

Are there any other projects besides Star Wars that you have coming up soon that you want people to know about?

Lots! Let’s see–so, I have two series with Vault Comics, Wasted Space (like Star Wars, but more dirty and existential) and The Plot (gothic horror). I have an all-ages series with Impact Theory called Hexagon, which is like The Last Starfighter in all the right ways. Archangel 8, a Punisher meets Hellblazer thrilled from AWA, and The Lost Carnival: A Dick Grayson Story.

For more please be sure to check out michaelpmoreci.com and connect with Michael on Instagram and on Twitter. Keep an eye out here and on YouTube for more about Battle Tales!